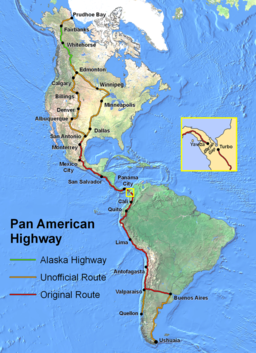 It’s a cheeky play on words I know, but I’m sure you noticed that I substituted ‘to’ for ‘till’.

But the end of the world does exist, and you can find it in Ushuaia, South America.

Ushuaia is the capital of Tierra del Fuego in Argentina, and is commonly regarded as the southernmost city in the world. It is bounded on the north by the Martial mountain range, and on the south by the Beagle Channel.

The End of the World is at the southern end of the Pan American Highway which is a network of roads that originates in Prudhoe Bay, Alaska and runs 19,000 miles to just south of Ushuaia — with only a 60 mile interruption in Panama.

When we booked our South American holiday one excursion stood out more than most. A visit to the End of the World. We booked our places on the tour and early one morning boarded the coach for the drive to our destination.

It was a wonderful sunny day, and there was an almost cloudless sky. It might have something to do with being so far south but cloudless sunny days like those have a slight dream like quality far from the mists and haze of the big cities to the North. The mountains just seem to grab you from afar, the colours are a lot brighter and the air tingles with expectation.

It was a pleasant day, neither warm nor cold. It was also a public holiday and as we drove along the winding roads through the Patagonian Forest there were picnickers and families gathered around their barbecues, probably preparing their Asadas while their children skipped and played on the grass.

Our guide was in good spirits because of the weather. It rains a lot around Ushuaia, on average there are over 146 days of precipitation a year, with many cloudy and foggy days, averaging 206 cloudy days a year. So he reminded us of our good fortune, while informing us of the ravages caused by wildlife introduced only decades ago that were destroying the forests. From just a few pairs, for example, beavers had bred and multiplied with disastrous damage to the trees in Patagonia.

We stopped at a Visitor’s Centre on the shores of a lake and it was a golden opportunity for me to leave our party behind and head off along the trail to take some photos so I left the others and made my way along the shore until I was alone. The conditions were ideal for taking some great shots. They would have been even better in early morning or late afternoon but at least the sun didn’t flatten the panorama, and as I mentioned earlier, the air was exceptionally clean and crisp. I could almost imagine a smile on my camera as I tried to find the most appealing points of view.

I could have stayed for hours watching the sparkles on the water and listening to the sound of the waves on the shore but it was time to pursue our trip — to the end of the world.

We got back into the coach for another few miles and finally arrived at our destination. Many of our fellow passengers headed to the last Post Office but my wife and I headed along a winding footpath a short distance from the shores of a lake.

We left everybody behind and just walked. I wanted to get back to the shore further along the lake, but the footpath just winded toward the woods and after a few hundred yards or so I decided to leave the path and head across to the lake.

We held hands as we crossed the grass, making sure that we were safe under foot. You can never be too careful of what the grass might be hiding. Eventually we came to a clearing on the shores of the lake. Our own private heaven on earth, far from the crowds, just the two of us. Although it started off as just another adventure it became a special romantic moment that I will always treasure and I am certain that she feels exactly the same way.

There we were, the two of us, alone but not alone, at the End of the World.

I took you in my arms,  and kissed you, sealing those precious moments of togetherness in my heart.

That is why, my darling wife, that I’ll love you to the end of the world and for the rest of my days.

This is the tenth in a series of travel tales

7. It Takes Two to Tango

Quirky, 60 something photographer, writer and music lover View all posts by Graham Lawrence

This site uses Akismet to reduce spam. Learn how your comment data is processed.